Small ozone disinfection machines have been widely used in campuses. Ozone has strong oxidizing properties and has a strong oxidative response to bacteria and virus organic matter. It directly interacts with bacteria and viruses, damaging their organelles, DNA and RNA, and causing bacteria. The innovation of the old and new is damaged, resulting in the death of bacteria. In terms of campus applications, there are three main areas: classroom space sterilization, drinking water sterilization, and laboratory sterilization.

1. The use of ozone generator in classroom sterilization

The seasons change, the flu is more frequent, the climate is getting warmer, and the bacteria are initially increasing. The temperature and humidity have become a breeding ground for bacteria. There are more bacteria, and some prevalent diseases have initially appeared, such as the recent hand, foot and mouth disease, which occurs frequently in spring. Colds, measles, mumps, scarlet fever, chickenpox, etc. How can we prevent prevalent diseases in spring to keep family members away from diseases? Use a small ozone sterilizer to disinfect classrooms, canteens, dormitories and other places every day to prevent interspersed infections and ensure children health.

Ozone can kill harmful bacteria, viruses, fungi and other microorganisms in the water. And it has the advantages of no residue, no secondary pollution, and increased water activity.

Now ozone has been widely used in sewage management, air management and other tasks. It can effectively degrade COD, BOD, ammonia nitrogen, heavy metals and other harmful substances in sewage, and can also decolorize and improve biodegradability. It still has a good effect on extremely difficult sewage. In atmospheric management, ozone can be used for desulfurization and denitrification, which has gradually replaced the original process. The ozone removal rate is higher and the effect is more ambitious.

Sterilization and disinfection: The small ozone disinfection machine can kill all pathogenic microorganisms such as bacterial propagules, spores, fungi and viruses, and can disinfect and sterilize indoor air and the appearance of objects.

Removal of peculiar smell: The small ozone disinfection machine has excellent peculiar smell removal function. It can quickly oxidize and divide the organic or inorganic substances of odor, oil fume, dust and other peculiar smell generators, and play a role in fresh air.

Repelling rodents and insects: The odor produced by the small ozone disinfection machine can quickly repel small animals and insects that are more active to odors, such as mice and beetles.

Decolorization and COD reduction: The ozone generator can degrade COD, BOD, organic heavy metals, etc. in the sewage. Ozone has a bleaching effect and can decolorize the sewage. It has a good effect on sewage treatment. 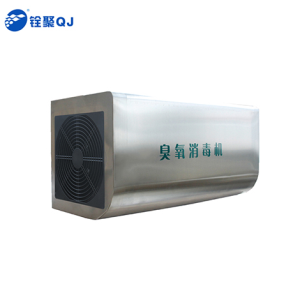